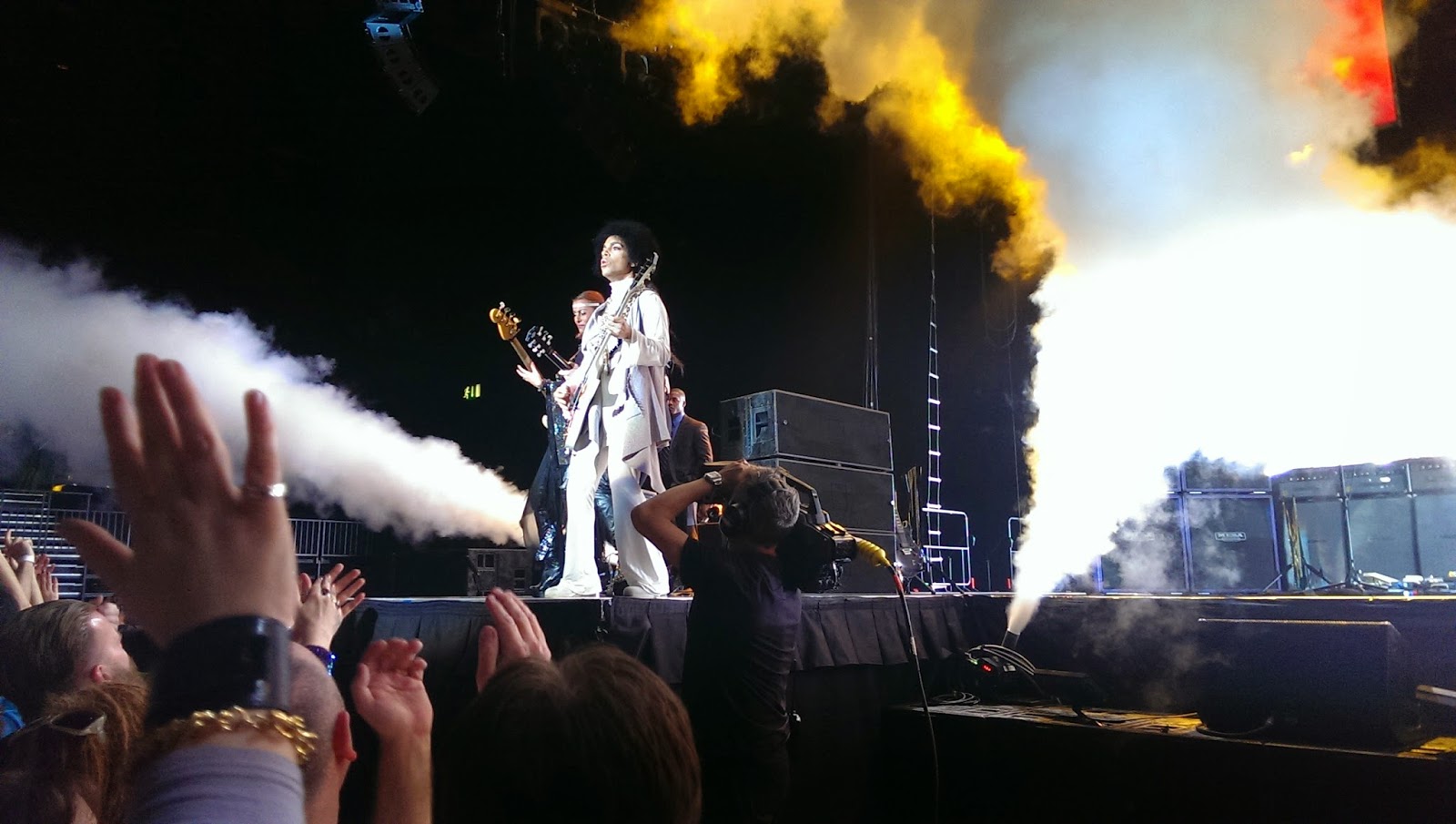 As we approach what appears to be the end of the Hit and Run part II tour of the UK, reports from fans who are seeing Prince for the first time on this tour are still raving that these are the best shows they have ever seen.  Reports from fans that have been to multiple gigs at this point are pointing out what was better on this, that or the other date - maybe too much of a good thing for some maybe?

Here is a fan report from last night's gig.

It was an unusual move for Prince to have a support act.  I don't remember him ever having an opening act in the UK, unless they were one of his side projects (like the NPG during the act II tour).  Laura Mvula seemed to be fairly unknown to most fans, but she soon one the audience over with her incredible voice and smile.  She had a compliment of strings with her including 2 harps, violin, cello.  Her material is very original went down really well.  A lot of people were surprised by her.  Prince came out (somewhat stealing her thunder) during her second song and sat on the stage to the side to watch her set.  They quickly put up a makeshift curtain up, so that people couldn't see him.  Just before she finished it up we saw him bolt backstage to get ready.

This was the only one of these Arena gigs that I've attended, following getting to a few of the smaller last minute gigs on Hit and Run part I.  The organisation at this gig was incredible.  The venue bought into the fan numbering system wholeheartedly and they ensured that everyone that bit there early had priority entrance and just before the doors to the venue were opened put everyone in number order and literally allowed people in one at a time in number order!  I've never seen anything like this anywhere - it was the fairest and most stress-free entrance to any general admission gig I've ever seen.   It was virtually like having reserved seating for those that arrived early enough.

I was surrounded by a great buch of enthusiastic fans  and the opening number of Let's Go Crazy had us all freaking out and then straight into Take Me With You - it was like a mini purple rain celebration!! 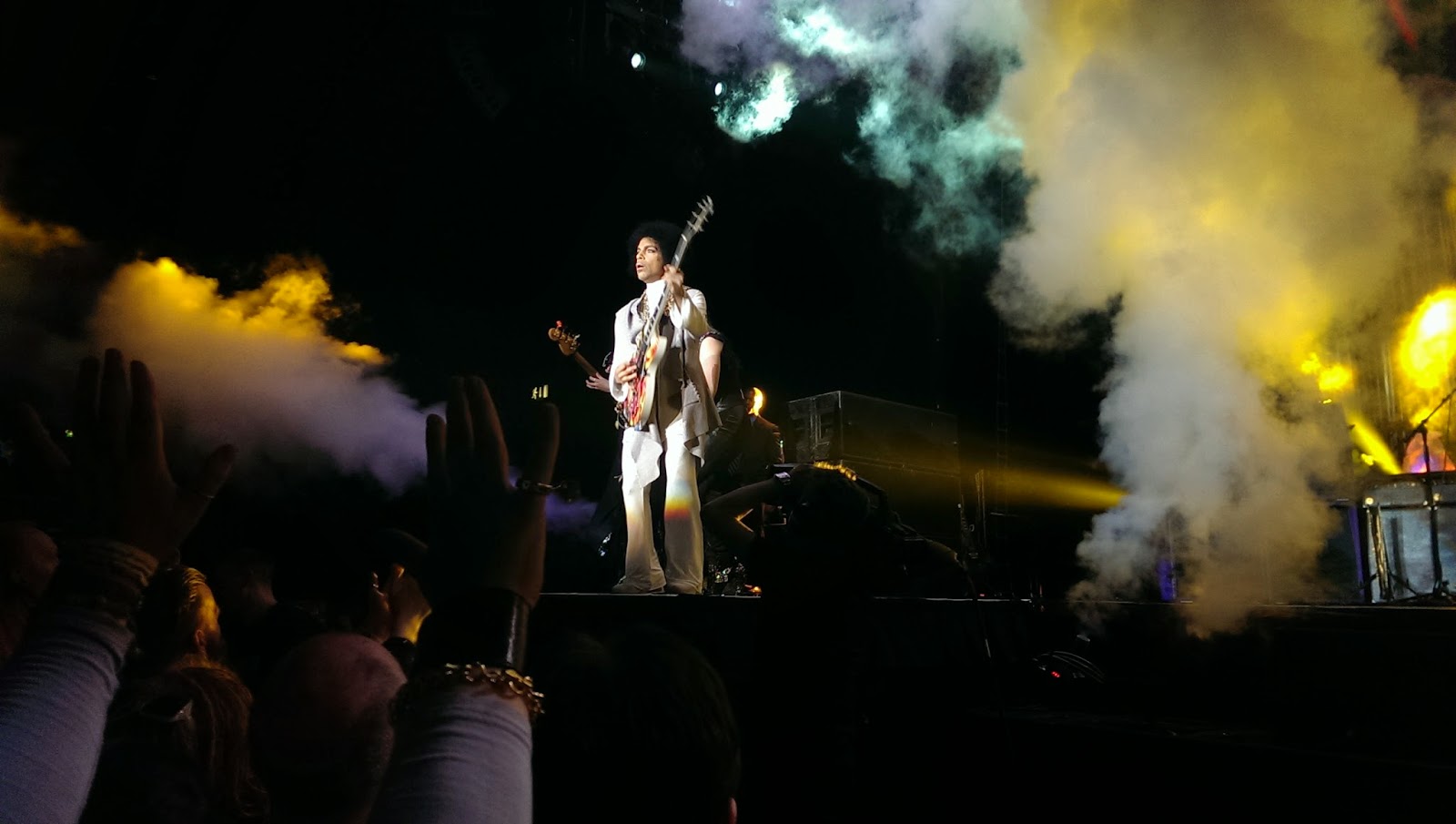 Somehow with Raspberry Beret and U Got The Look the atmosphere seemed to dip.  Maybe I zoned out our was distracted by the odd baton wielding female vocalist who suddenly seemed to be taking lead vox from time to time.

At one point (can't remember which song) Prince said, "I can't hear YOU singing) and was shaking his head, then I'm pretty sure he said "there's no house vibes"...   That seemed to spur him on to pull a response out of the audience.  The whole band kicked it up a couple of notches for Cool - the crowd around me were funky as hell and all into the call and response.  I looked around the arena and it seemed like everyone was on their feet dancing.  Pretty good for a track that your casual fan might not be familiar with. The set list is a blur - for me it carried on like that til he somehow kicked it up to another level for COOL. 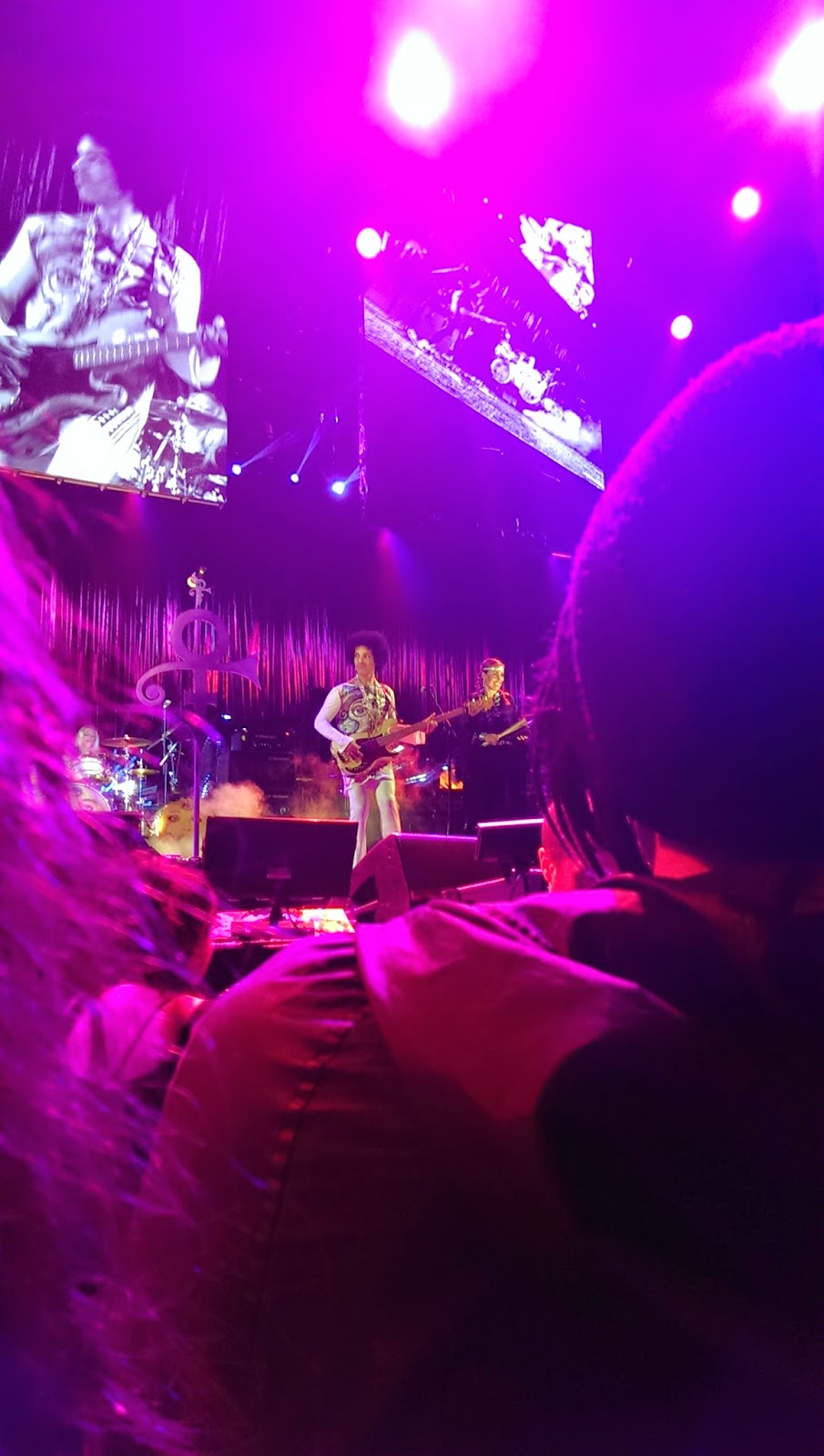 Nothing Compares 2 U was sublime.  The rest was a blur, highlights were Prince on bass segueing into what's my name with lyrics adapted from the sacrifice of victor, seeing the interaction with the band on Plectrum Electrum, Hannah's incredible drumming, Hot Thing, A Love Bizarre, Controversy.

Prince came out with a bunch of balloons and let them go to signal the end of the gig. 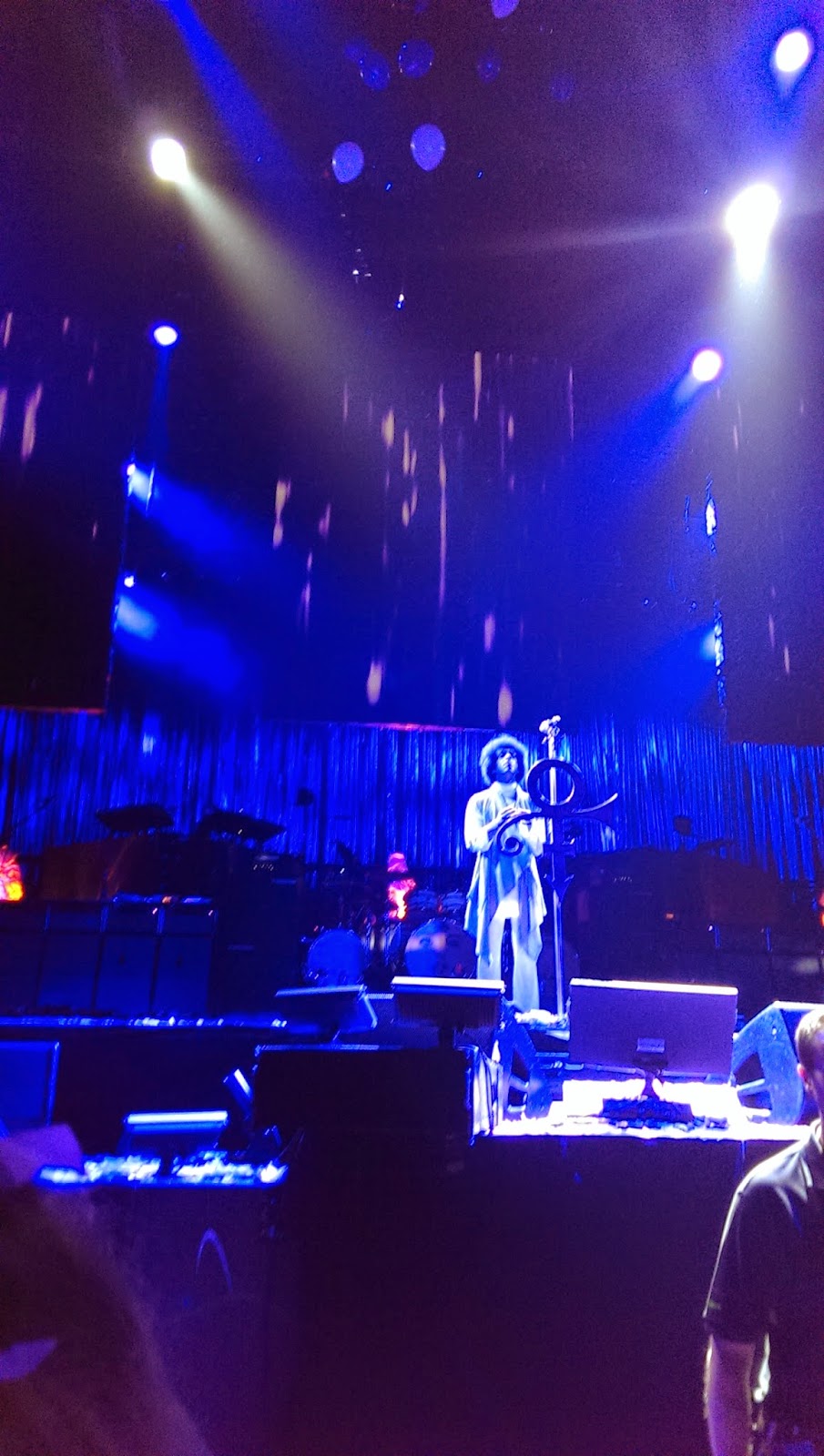 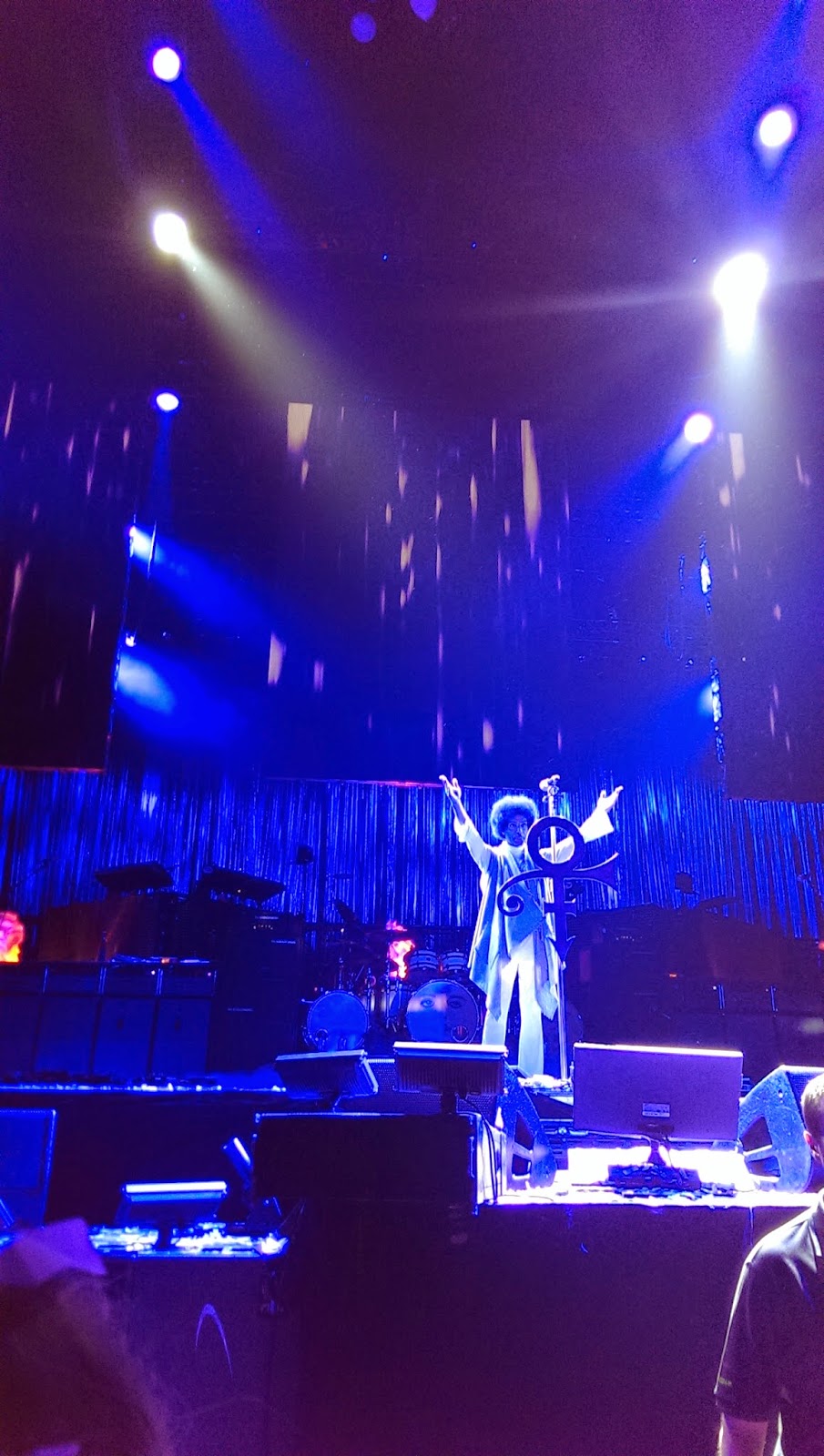 The lights came up at 10:50 and the arena is known for a very strict curfew of 11pm.  The hardcore were not giving up and encouraging everyone around them to cheer and chant.  I actually thought there might be no encore as it passed 11pm and then our cheers were rewarded, kicking the encore off with Musicology, Funk n Roll and Pretzelbodylogic. 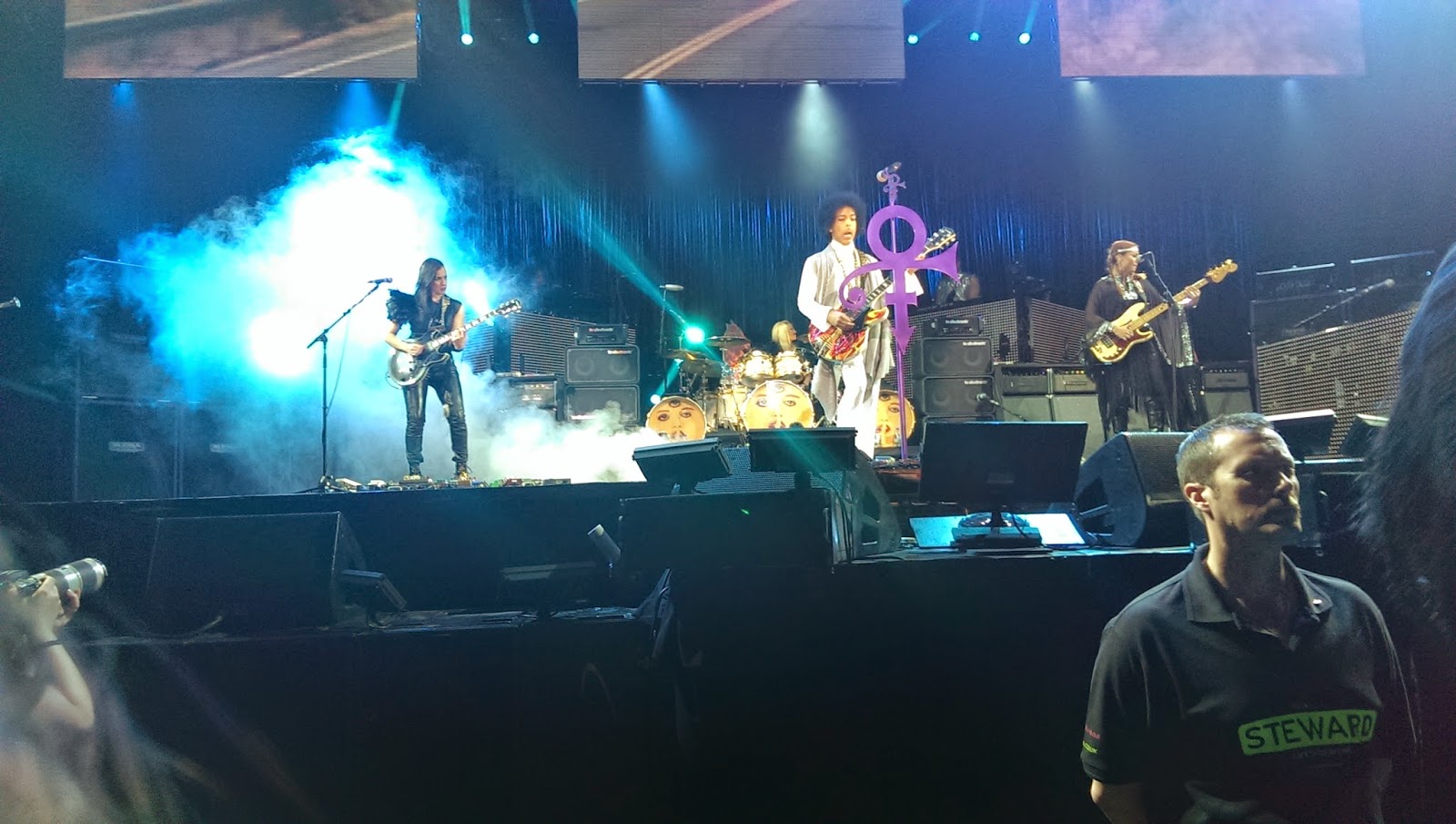 I think there were a couple of technical issue but Prince took then in his stride and did what he does best - tore the roof of that mother!

Thanks to Paddy for this report