I remember the first time I saw Prince live.  It was the Diamonds & Pearls tour and one of the many striking things from that performance was the incredible performance of Rosie Gaines.  She's an incredible talent with such a powerful voice and unique style that included an incredible synthesis of a horn section! 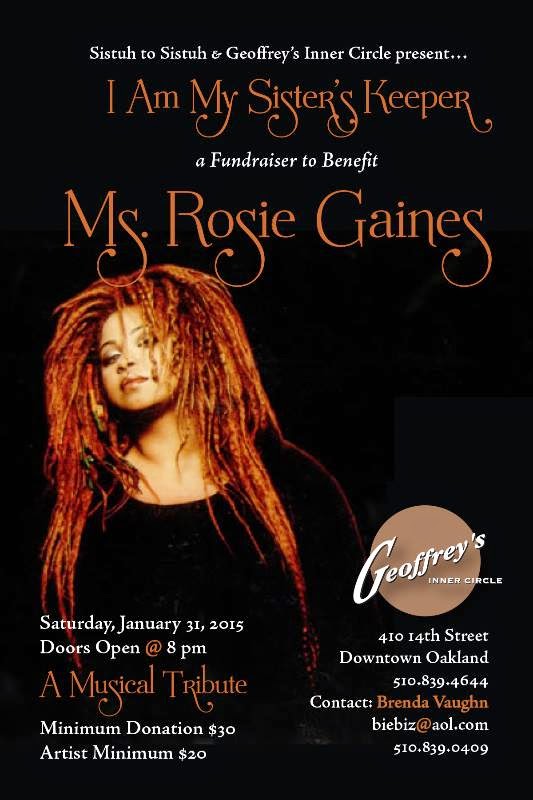 The Electronic Urban Report published details on the 10th January 2015 that Rosie has unfortuantely been suffering from medical problems resulting in large medical bills.  On hearing the news Prince and Sheila E have already offered and provided some support - but we can show our love and help as well;


"*On Saturday, January 31, entertainers from the Bay Area in California and beyond will be  uniting to help one of their own in a fundraiser for former Prince protégé Rosie Gaines.
Gaines’ daughter, Latoya Gaines, revealed in a press release that her mother has been suffering from diabetes in addition to other illnesses. In early December, the singer was admitted to a Bay Area hospital for a major infection of both her legs.
Gaines’ medical situation has motivated Sistuh to Sistuh (STS) founder and vocalist Brenda Vaughn to organize a tribute to Gaines. The event, hosted by comedienne/actress Luenell (“Raising Whitley,” “Real Husbands of Hollywood”) and KBLX radio personality Nikki Thomas will take place at Geoffrey’s Inner Circle, 410 14th Street, Oakland with doors opening at 8:00 p.m.

There are a few ways you can get invloved

Do Come 2 the Concert!

If you can get to the benefit concert in the Bay Area on the 31st January - do it!  You'll even see Levi Seacer Jr. from the NPG amongst a host of great musicians.  Details via the link above.  You can also find more info via Brenda Vaughn, who is organising the Benefit Gig
https://www.facebook.com/brendavaughn

Do Buy The Single


Here's the link for US

Here's the link for UK

And for the Android Army
https://play.google.com/store/music/artist/Rosie_Gaines?id=Ab7d7suvgxy7jxyywwcra63vtli&hl=en_GB

Let's show this talented musician, that brought us joy through her music some love and the power of the #PrinceArmy