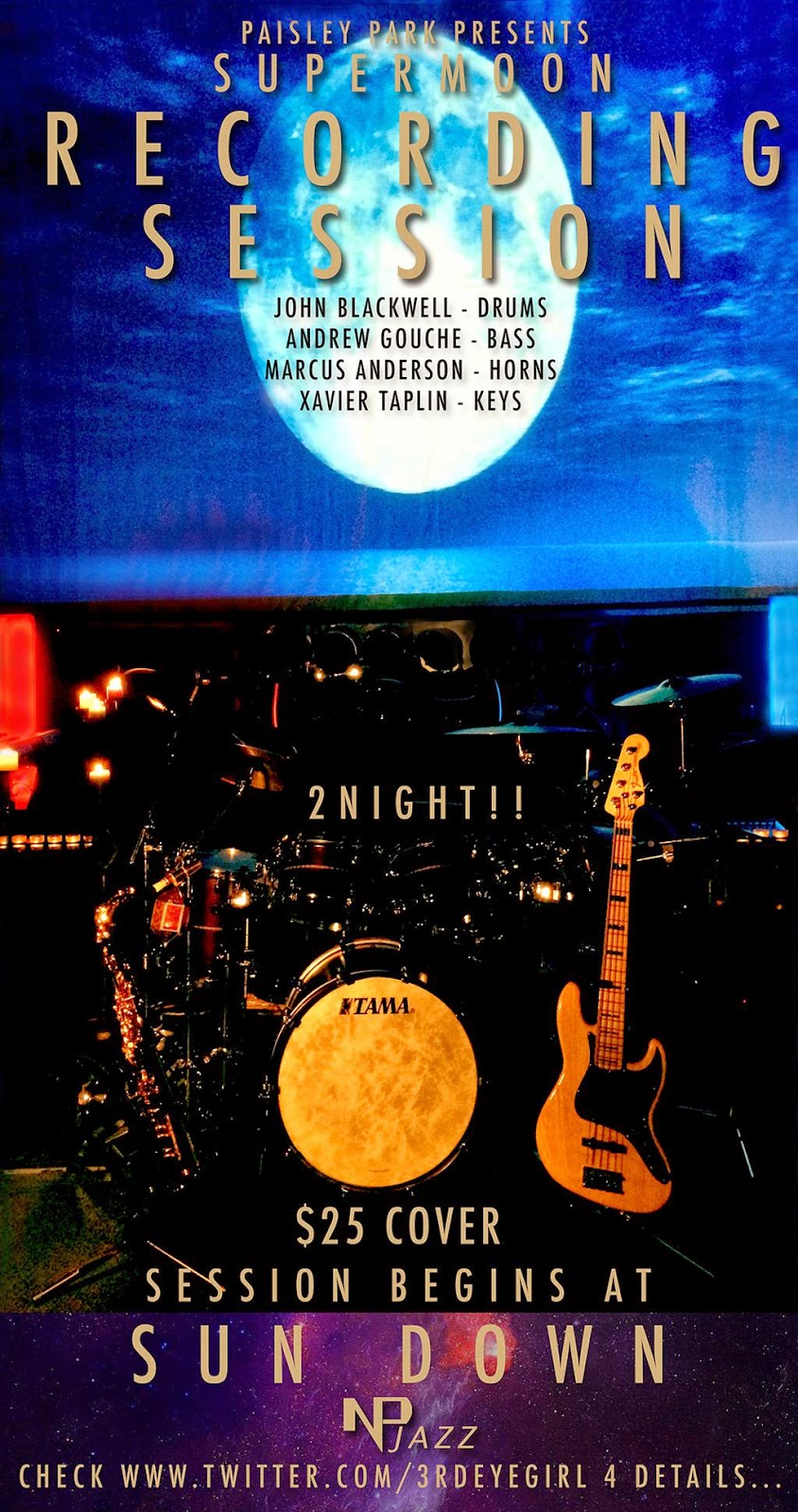 Prince is well known for his last-minute jams - but last night was really tight.  I think at most about 4 hours notice of a mysterious SuperMoon jam at Paisley Park.  Then 2 hours later the flyer above went out via @NPGOFFICIAL and @3RDEYEGIRL.

Looking at the list of musicians and after seeing the livestream just a couple of weeks ago of what this band can do - If there was a way to get there - I would've been there in a heartbeat.  (Catchup with the session here)

Here is the first report that I could find online of what went down last night....

"Tonight's event was held in the Love 4 One Another room. It started out with DJ, old school music. Then Marcus Anderson, John Blackwell, Andrew Gouche, and Xavier Taplin took the stage and played a jazz session. Prince was standing off to the left of the stage. They said it was all new songs that they had created the last 2 weeks. There were probably about 150 people there. After that set was over, the DJ started playing again. Marcus came back up to the stage and announced that they would be doing the set again and to act like you never heard the music before. 3RDEYEGIRL were walking around and Nik West was there. They took the stage again and this time Prince joined in and played some guitar and some killer guitar solos. He was dressed in all black. About half the people left after the first set, so there were only about 75 people left. This just stomped all over the show from a couple of weeks ago!!!"

Verdict: Sounds like a rare opportunity to witness Prince and a new and exciting group of musicians (NPJazz / New Power Jazz?) experimenting and trying out some new material - can't wait to hear it!!

Here's a sample uploaded by Nik West on Instagram

November 23, 2018
Welcome to the second ONTHEONE podcast! In this podcast we talk to Sans Soucis. In a fun and laid back interview interspersed with clips of her material, rising star on the London jazz scene, San Soucis talks about the meaning behind the music, inspiration, integrity and the healing power of music and its role in community. Follow us on https://www.facebook.com/ontheonepodcast https://twitter.com/on_the_one https://www.instagram.com/ontheonepodcast/ You can find Sans Soucis on all socials under @sanssoucismusic and her material is available to purchase or stream from Apple Music, Spotify etc. under Sans Soucis and Sans Soucis Experience. Please support the music if you like what you hear. Solo debut single: They Asked Me To Stay https://sanssoucismusic.bandcamp.com/track/they-asked-me-to-stay social media links: https://www.instagram.com/sanssoucismusic/ @sanssoucismusic on every platform Hatred For Free (live session) https://www.youtube.com/watch?v=KuA0KSyJ
Post a Comment
Read more
November 07, 2017
Welcome to the first ONTHEONE podcast! In this podcast we talk to Steve Parke, Prince's Artistic Director and Photographer for nearly 15 years from 1988.  Steve Parke is exhibiting his photos in the exhibition Picturing Prince: Photographs by Steve Parke at Proud Galleries, London from 9th November to 3rd December 2017.  Get more information and tickets from  www.proudonline.co.uk The image above is one of my favourite's from his book and is used with Steve's kind permission. "Untitled"  © Steve Parke
1 comment
Read more

January 23, 2016
This week saw what felt like the culmination of a few years of building momentum within the international Prince community.  Starting with impromptu gigs in London back in 2014 and Prince's foray into social media, links between Prince fans all over London, the UK, Europe have grown and grown.  In the last year or so more and more of us have been lucky enough to make it over to Paisley Park, sometimes catching shows, sometimes not and connecting with communities in Minneapolis.  So many of the fans in this international community have a lifelong dream to see Prince perform in his own place, Paisley Park -  Recording studios where most of his music has come from and a live performance space that Prince uses as his personal playground to try out new ideas and have fun at impromptu gigs enjoyed by the local Purple faithful. Following a postponed European tour, Prince announced a concert at Paisley Park with advance ticket sales.  This was the first time in over a decade that Prince
Post a Comment
Read more