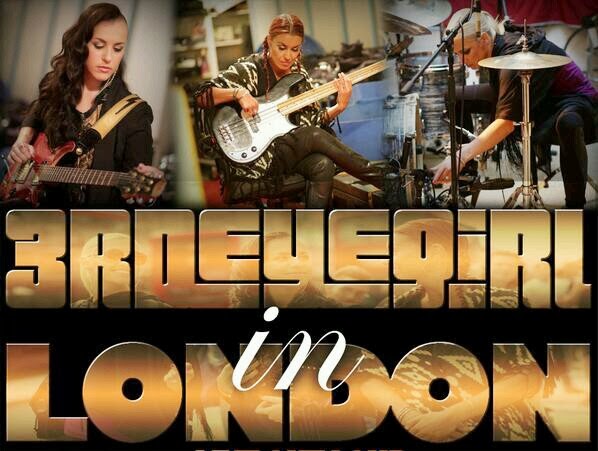 One might expect a number of US TV appearances on popular entertainment shows to promote this new single and forthcoming album and tell the rest of the world about what he has been busy doing over the last couple of years.  However, being one to always do his own thing, Prince appeared to have flitted away to London in a mysterious move that had UK and European fans excited.  What was going on? No shows had been announced, no tickets sold. Just these four words "Prince Now in London"

Official word had it that Prince would be conducting a press conference in the living room of his friend Lianne La Havas, a very talented but relatively unknown British singer / songwriter.  It turned out that perhaps one or two members of the press would actually get to attend this event.

Prince fans who had caught on to the fact that their favourite artists was in town were eagerly awaiting news from this press conference, but no information was coming out.  At the time, I was working in London and had a 90 minute journey home.  I finished work pretty late on this day and waited around a little to see if anything would be announced.  Prince has a track record of announcing a surprise secret gig after making some kind of announcement.  I was luck enough to see Prince at the 1500 capacity venue Koko in Camden back in 2007 after he announced that he would be taking up residency in the O2 for a string of record breaking shows.  It got to about 9pm and I figured that we would hear something the next day - whilst remaining conscious of the fact that the working day does not end for Prince, just because it's 9pm!

Making my way via the London Underground and railway, I was checking my phone for updates at every station that had a wi-Fi connection, ready to turn around at a moments notice.  Eventually I got home and no sooner had I got in and sat down a message appeared in my twitter feed saying "open press conference / sound check at Electric Ballroom in Camden - now".  For a moment I hesitated - excited, I went online to share the info with some fellow prince fans.  I typed in "I'm tempted to go down".  "Do it" the reply came back.  Hmmm just the kind of crazy encouragement I was looking for.  "But I'm not press, I don't have a press pass", I typed.  "Just take a big camera" came the reply.  Sold.  I grabbed my DSLR and some passes from a music event that I had been to previously told my wife what I was up to and she kinda shook her head and said ok.  Jumped in the car punched in the directions for the electric ballroom and took off.  It was dark, cold and raining pretty hard as I drove, dreaming up stories I might tell to try and blag my way into this press conference. As I got into Camden, I realised that if I wasn't walking straight in I wasn't really dressed for standing outside in what become torrential rain.

The satnav told me that I had arrived, but is couldn't see the building that I had identified by looking at photos online before heading out.  I drove around the one way system in Carmen a couple of times before I noticed a small and unusual queue in front of a nondescript building which had its signage covered up - just the place for a secret impromptu gig by the worlds most mysterious megastar! 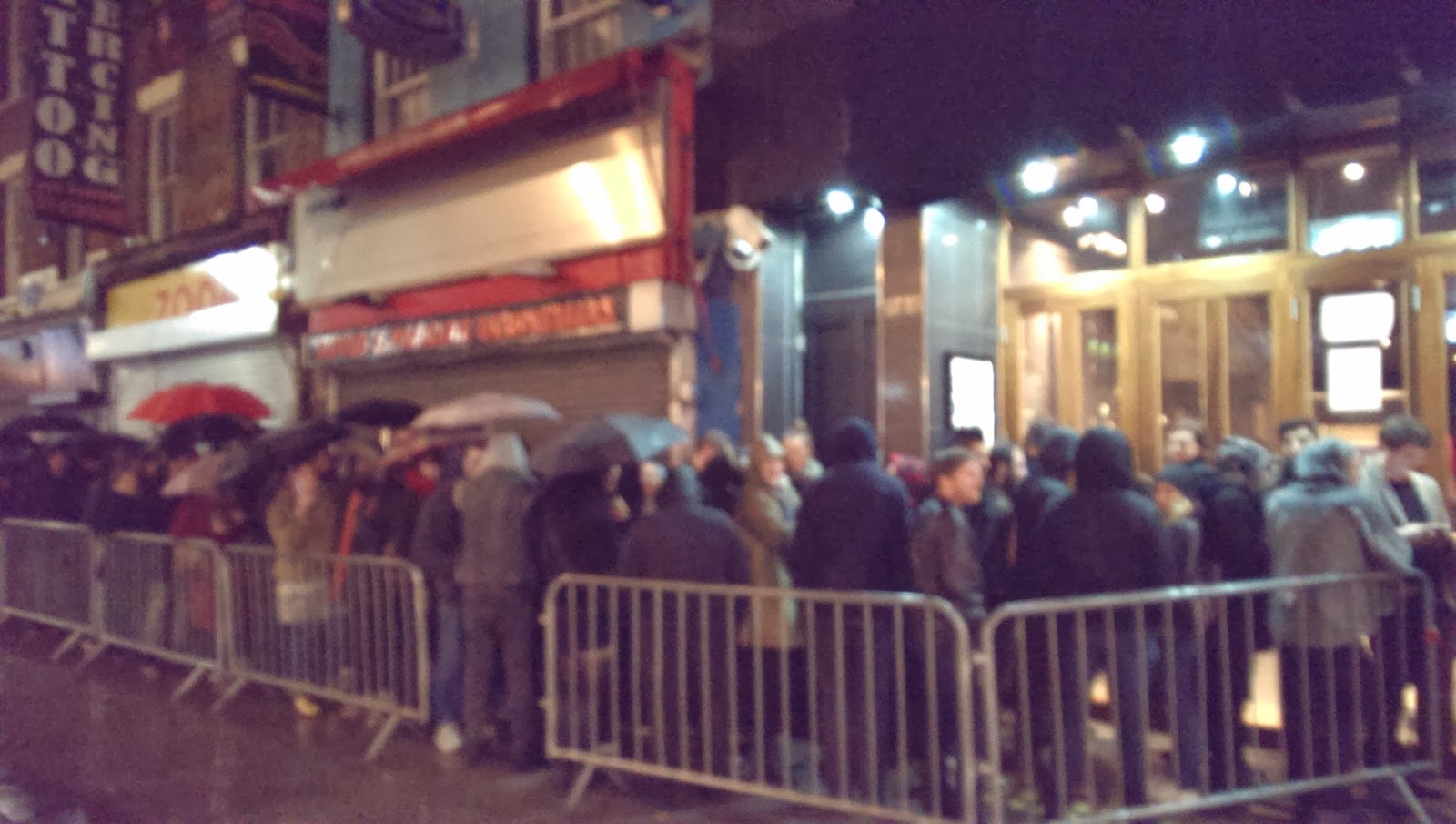 After a quick look at the queue and I decided that there were too people many to just be press and I couldn't see any big cameras so  I decided to ditch my story and avoid getting my camera drenched.  I rocked up to the back of the queue of about 100 people who seemed to be bubbling with excitement, despite being soggy.  For some reason, in hushed tones I enquired "are you here for the prince gig?"  - YES THEY WERE!!  Introductions quickly made we all started to discuss how we had heard about the gig, what we were doing before the announcement etc.  There was a lot of talk of having been in pyjamas and rushing out of the door!  A lot of the contingent were checking twitter for any news as to whether fans would be able to get in to see this "soundcheck" (Prince soundchecks for his soundchecks - so a prince soundcheck is actually a gig to mere mortals like us!). After about half an hour we heard a rumble coming from inside.  From the group around me came outburst of excitement and frustration - maybe we're not getting in.  Raindrops were splashing onto the screen of my phone as I checked for updates and then there it was a photo from inside.  Prince on guitar, about 30 photographers.  My heart sank, should I show my newfound compatriots or let them live a little longer in hope? Reluctantly I showed the person next to me and then another then everybody wanted to see.  Although we were disappointed we were resolute.  There was no way we were leaving unless we knew it was over and we knew for sure there was no way we were getting in.  I started to think about going and grabbing my camera and running to the front , but I felt a sense of loyalty to this band of dreamers and hopefuls that I had just met.  I would stay here and my fate would be their fate.  I stepped to the side to to look at the queue and there were probably about 250 in the queue at this point.

After ten minutes the line began to move - faster than queues normally move.  It was as if a wave had hit us from behind and was carrying us toward the doors.  As we got closer I quickly realised that there were no tickets, no searches, we were in!  Running through the doors and into a room where, on the stage, in the middle of executing a killer guitar solo, was Prince.

Is this really happening?

Looking around, there were about 200 in the room with people still coming in behind us, the same bemused / excited expression lighting up their faces as they joined us in this surreal experience. 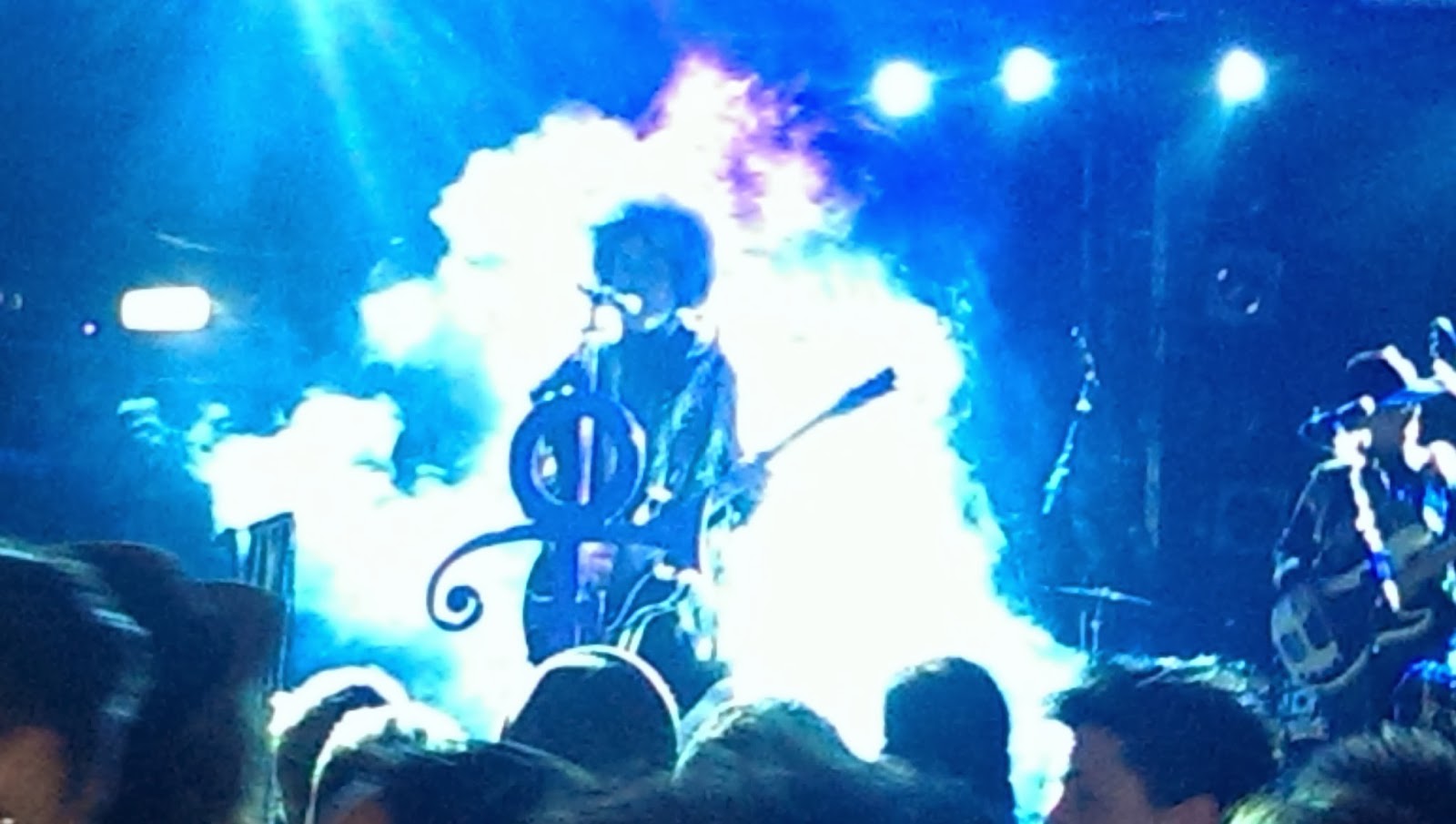 Prince and his new group 3rdEyeGirl were tearing through a reworked version of I Could Never Take the Place of Your Man with Donna's incredible guitar work, it sounded so fresh.  This was not an artist playing his old hits, resting on his laurels - this was someone rediscovering the emotion of that original work and re-expressing it in the new medium of this incredible group of musicians.  It was like hearing it for the first time..  The atmosphere inside this 1000 capacity venue was incredible, the audience went crazy, then we hear the driving, opening riff of Chaos and Disorder, the title track to an album that many dismissed as a throwaway - now hitting us hard, the energy and volume from the band hitting us in almost perceptible waves. 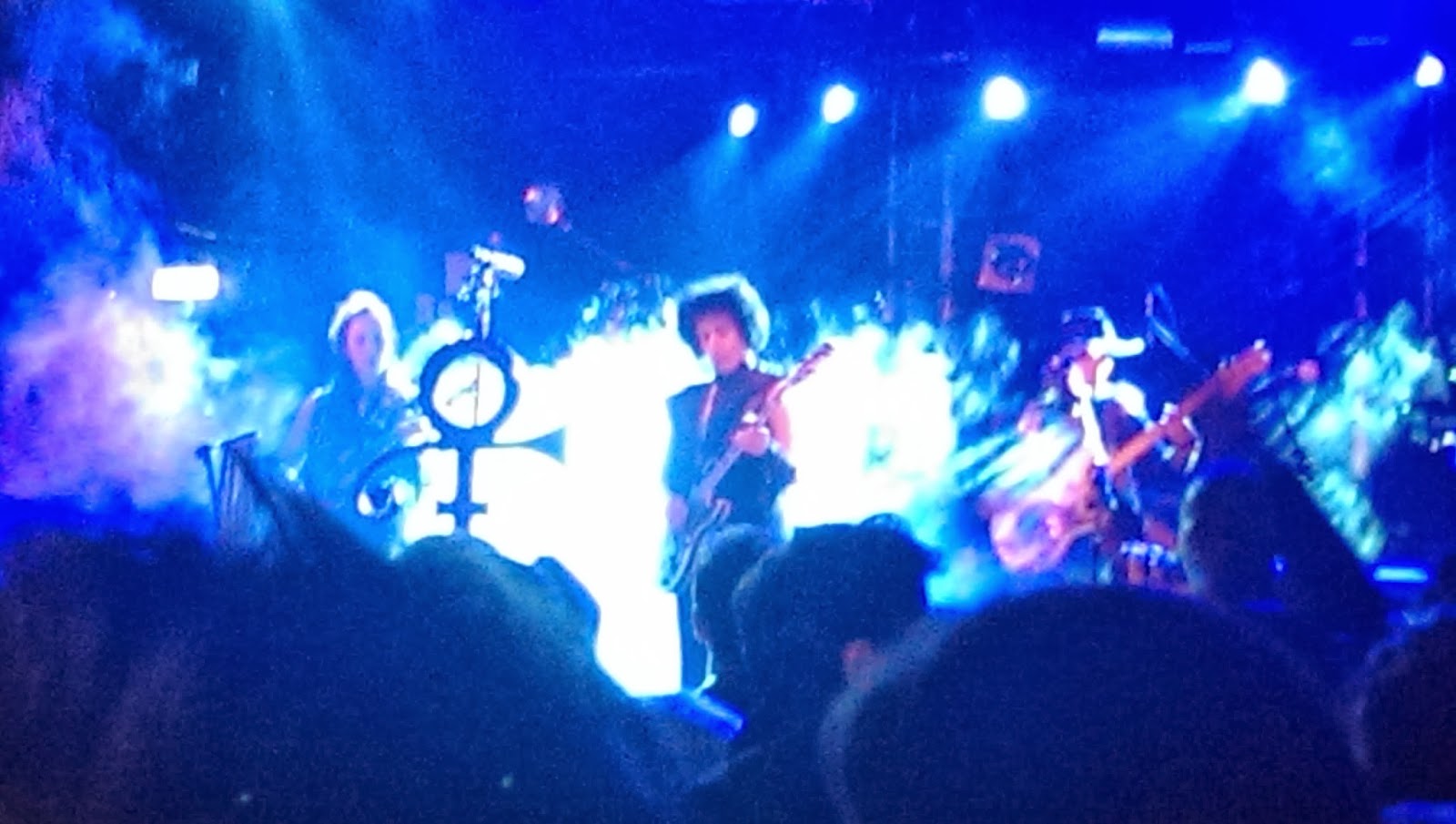 Prince is jamming and improvising and he starts a call-and-response with the audience, splitting his audience into the fellas, singing "I, I, I, I like it there" and the ladies singing "I, I, I" - the choir were remarkably enthusiastic, the sound and feeling incredible and Prince commented "you sound like 5000" 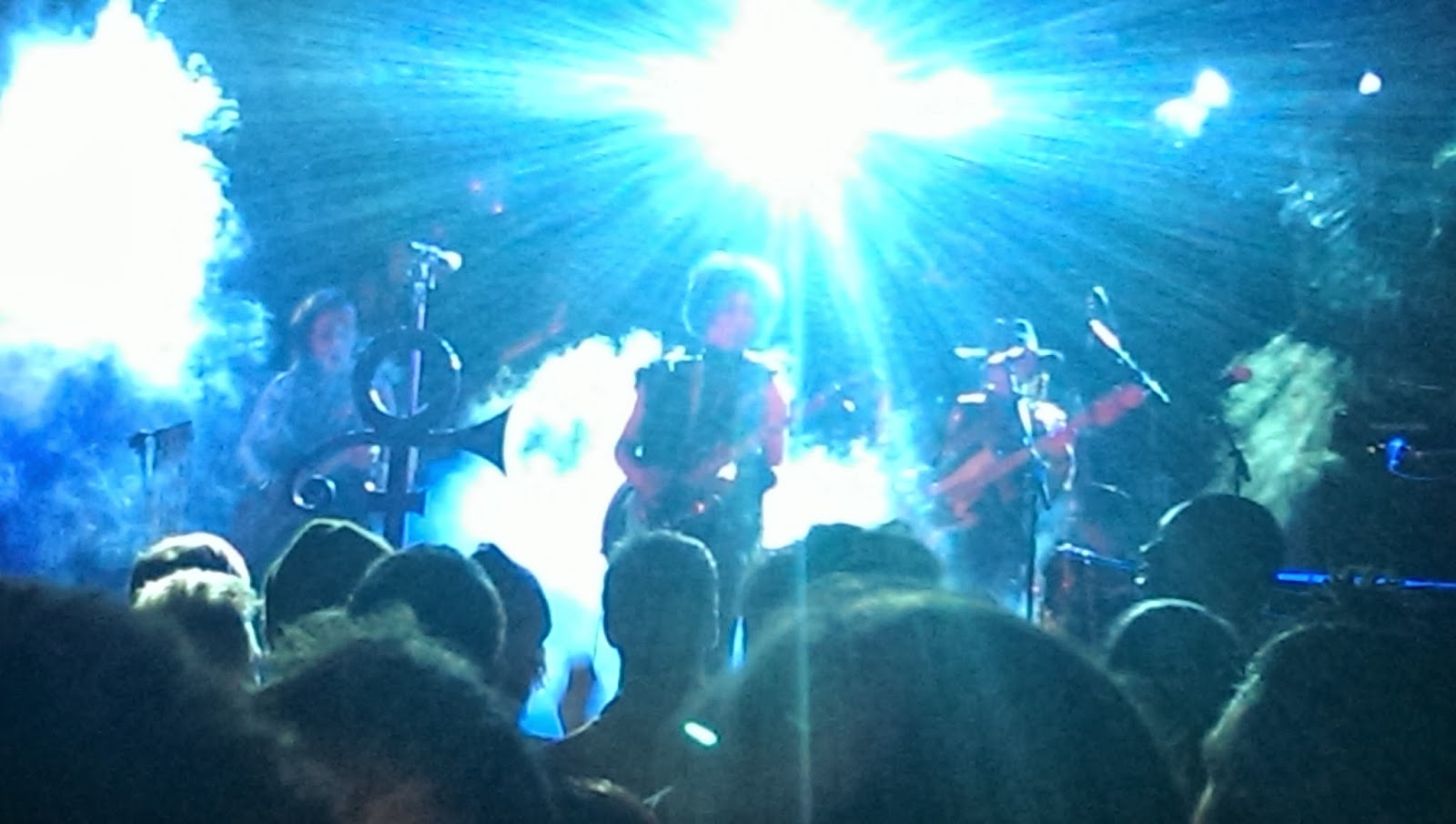 Prince then kicks into a funky and upbeat performance of Cause and Effect and then before we know what's hit us it's over and Prince is saying good night, the audience are making their voices heard calling for more, chanting "oh we oh, woah oh" after a minute or so the girls rom the band walk out and I anticipate that they are going to tell us that it's over, but Prince walks up from between them and thanks us for coming out and that he wants to respect the venue because they let him come over and setup so late and that they would be back tomorrow, earlier and funkier.

In a daze, I start to walk out of there, then realise I should take some photos of the stage to remember this moment. 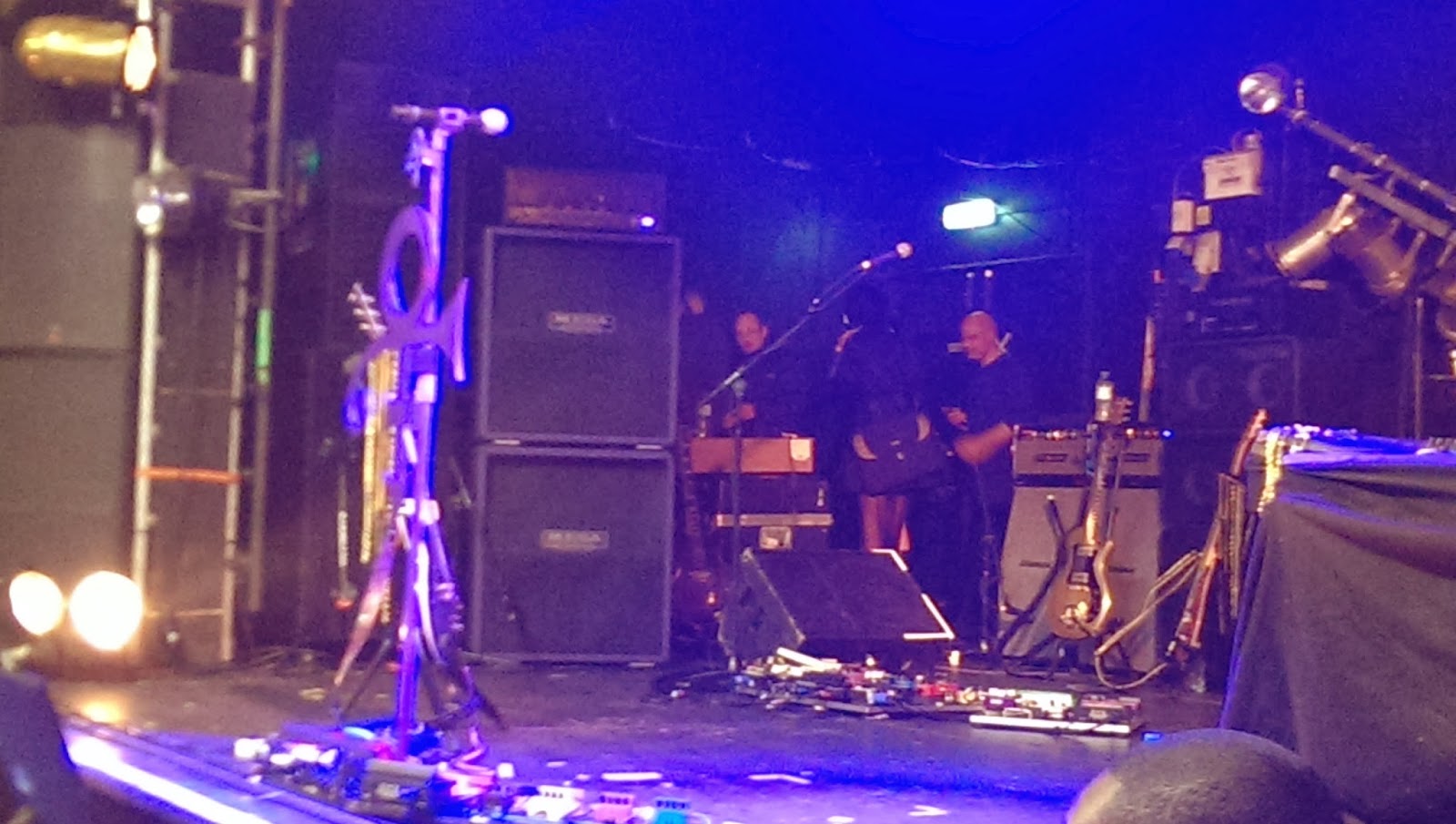 What we've just witnessed beginning to slowly sink in. "Are you coming back tomorrow", "hell yeah!"  This is it, Prince is here and he's playing the electric ballroom tomorrow!  It's on!!!!

November 23, 2018
Welcome to the second ONTHEONE podcast! In this podcast we talk to Sans Soucis.